Chris Arrow is a female cat and is a former antagonist in Lingers. She is currently a brunette and has become a supporting protagonist.

Chris was an arrogant, selfish female. She wanted to be the only one to be the television presenter, wanted many talents and wanted to be famous and popular. Chris has shown no scruples about lying to everyone and thinking that she is the "heroine" of the stories (which is actually a lie to get what you want attention). She has blonde hair and black eyes, in her original form as an antagonist. Now as a protagonist she has brunette hair, black eyes and her personality is calm and kind now. 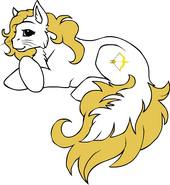 Chris Arrow (original, blonde hair).
Add a photo to this gallery
Retrieved from "https://heroes-lingers.fandom.com/wiki/Chris_Arrow?oldid=3331"
Community content is available under CC-BY-SA unless otherwise noted.